"Look at all the Pop Tarts!"

So I'm in Chapters today looking at books and as I'm flipping through this one on Indie Films, on the other side of the bookshelf I hear,"Look at all the POP TARTS!" Startled I look up to see a guy walking by really fast. Haha, that was so weird! In my head I deduce he probably has mental issues. It looks like he's coming back my way again...nope he went down a different aisle.

So then I'm driving home from Chapters, and I've gone about 3 blocks down, when I see this guy running on the sidewalk towards me. He reaches down and grabs what looks like a Wendy's soft drink cup and whips it in the air onto the road in front of me. What the heck??!? It's the same guy!!!

I think he is haunting me...

(on a side note, i never know which words to capitalize in a title and which ones not to. i'm pretty sure you don't capitalize "the" but what about "at" or "all"??)
Posted by Dr. Coopernicus Who at 4:31 PM 2 comments:

What Should I Do?

I should get a pet, but I'm not sure which animal suits my personality. What is your opinion? 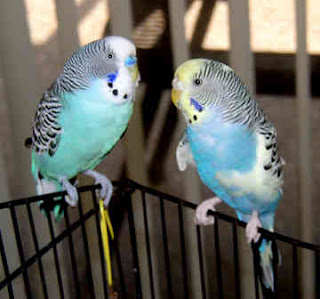 A bird of some sort? Flight is advantageous. 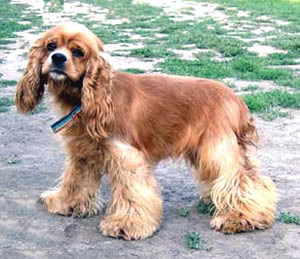 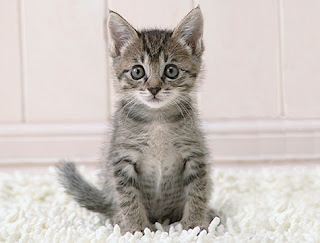 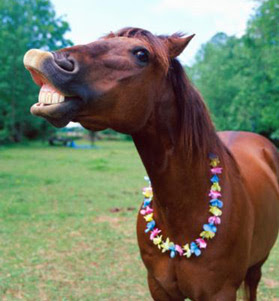 Could I ever love a horse? 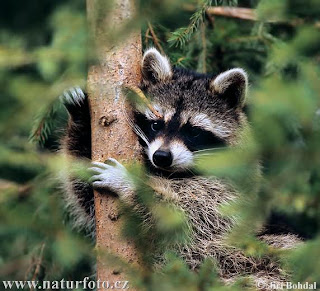 Raccoons are amazing looking, but I could never domesticate one. 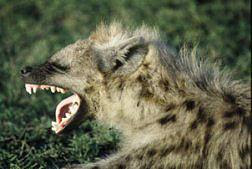 A hyena might end up killing me, but I like laughter (do they really laugh? what's the deal there?)

I've always been fascinated with dinosaurs.


Hippos. They don't look normal, but there is something alluring about them.

How about a chipmunk? They are great climbers!

I don't know. Too many choices.
Posted by Dr. Coopernicus Who at 9:56 PM 4 comments:

Sometimes I get in these ruts where I just feel out of place. Like something is slightly off-kilter. In these times I find myself making random comments and questions in my head:

"Do you know what I think of you?"

"Are you sure you want to go through with this?"

The funny thing is I don't really know why I say these things to myself. They just randomly pop up. Sometimes they have no application to my present situation. It's like a program kicks off in my brain that starts cycling through these sayings like error prompts on a computer.

Obviously, something isn't quite right.
Posted by Dr. Coopernicus Who at 12:39 PM 1 comment: 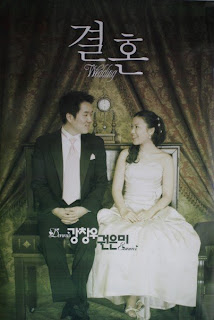 I am glad I could help Dennis out on his wedding. Here is a photographic journey of the day... 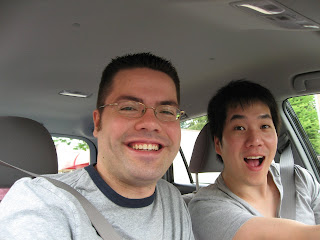 After washing the car, we headed over to Whiteday Wedding to put on our Tuxedos. I don't know about Dennis, but I probably could have used about 3 more hours of sleep. 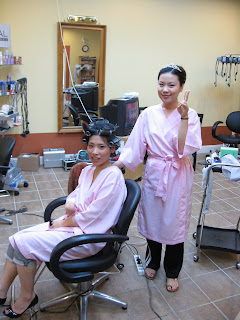 I've never been to a wedding where the bride and groom hung out the morning before the wedding. Dennis got his hair done right after girls. I was too nice to tell him I didn't like what they had done...haha. 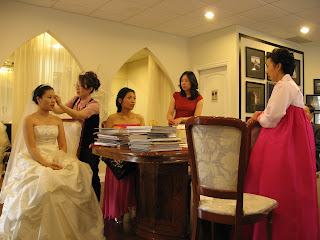 Once again, it was kinda weird hanging out with all the girls while they got ready. 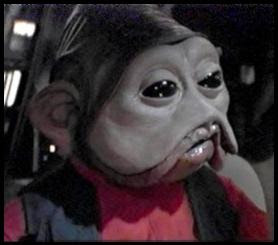 On a side note, Eunmi's dad looked like this guy from Star Wars... 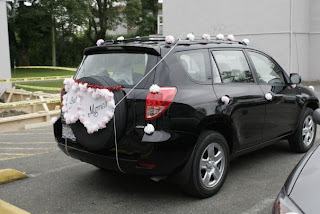 I had bought this weird two-sided tape to put these flower pompoms on Dennis' car, but it wasn't very strong and had to redo pretty much the whole thing just before the wedding! 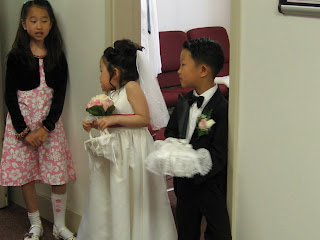 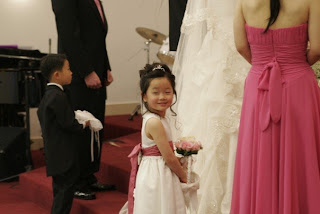 This was the cutest ringbearer and flower girl team that I'd ever seen. The girl was always smiling and the boy told me after, "You're really good at this!" Thanks...wait, what am I good at?!? 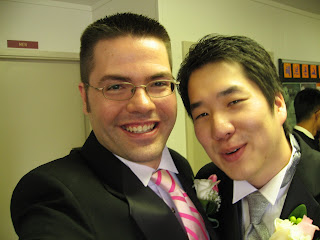 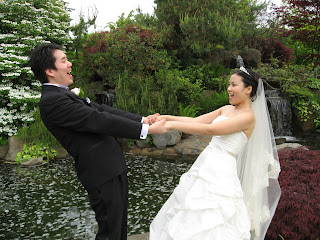 Before the reception we had a few more photos to take, but the photographer was who knows where, so we did our own little photoshoot... 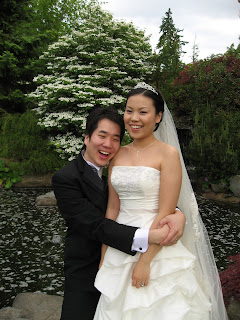 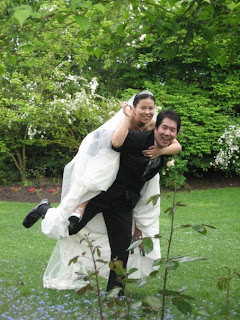 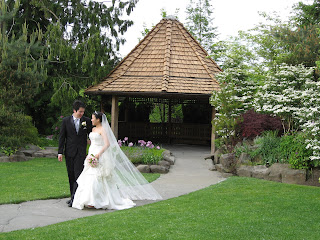 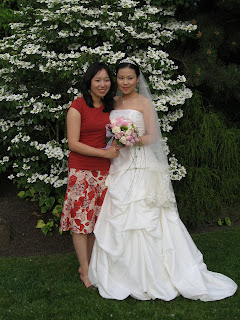 This is Eunmi's friend who is at YWAM in Kelowna right now. Greyhound went on strike the day she was supposed to come, so Dennis was the Saviour of the day by getting her a plane ticket at the last minute! 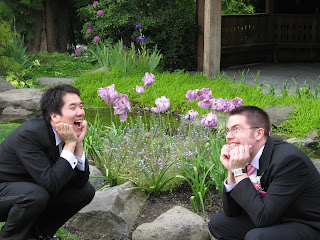 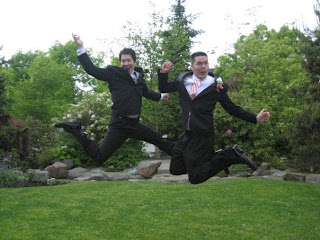 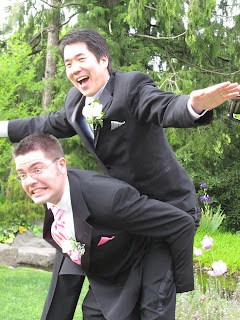 I am the wind beneath his wings. 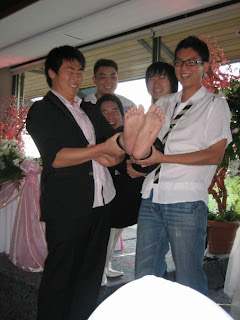 The reception was a lot of fun! A Korean tradition I had never heard of was the ceremonial foot-whacking...I don't really get it, but it was fun to watch Dennis scream out in pain. 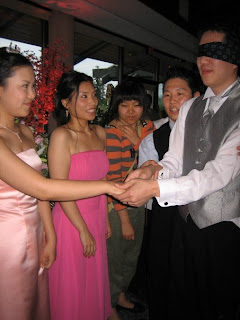 Dennis had to guess his bride just by her hands. He guessed wrong twice! Apparently the second time through he knew which one was her, but he mixed up the numbers. 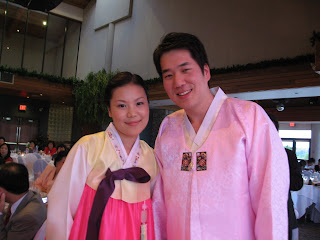 At the end of the day I got my reward when Dennis had to change into his traditional Korean outfit. Love the pink Dennis!!!

It was an excellent ceremony. The whole day I could only barely speak two phrases in Korean; Hello and Goodbye. How lame!!! That's one difficult language. In the end, everything went extremely well, and the final dance party will always be memorable (I got to dance in the circle with Nien Nunb!!).
Posted by Dr. Coopernicus Who at 8:47 PM 3 comments:

Dr. Coopernicus Who
I'm always making stupid little jokes or comments...I don't really know how to turn that off.